The use of Microsoft Hololens in medicine and medical education

Microsoft HoloLens is a pair of mixed reality smartglasses that Microsoft started develope and manufacture in early 2016. A short time later the Microsoft HoloLens would end up revolutionizing the medical education industry. Mixed reality is a hybrid of virtual reality and augmented reality. Hence, this is a platform that embraces both frameworks, a common starting point to be able to use applications and experiences designed for one and the other.

These realistic holograms deceive our senses so that light appears to be solid matter. The images of the HoloLens Project are built as the photons bounce off the device. The light particles then enter the lenses of the glasses and reflect off before entering the eye between several layers of glass. Moreover, large electronics manufacturers such as Samsung and Asus have interest in producing mixed reality devices, in collaboration with Microsoft.

These different approaches have distinct properties. Virtual reality has an unique immersive effect. The viewer travels to a completely digital world. Meanwhile, using augmented reality digital objects can be projected in real environments. Mixed reality allows experience both in a unified way.

At 3DforScience we have extensive experience in this type of development. All these advances are embraced by our team as an opportunity to improve the impact of our clients’ communications, transmitting innovation with the latest cutting-edge technologies. 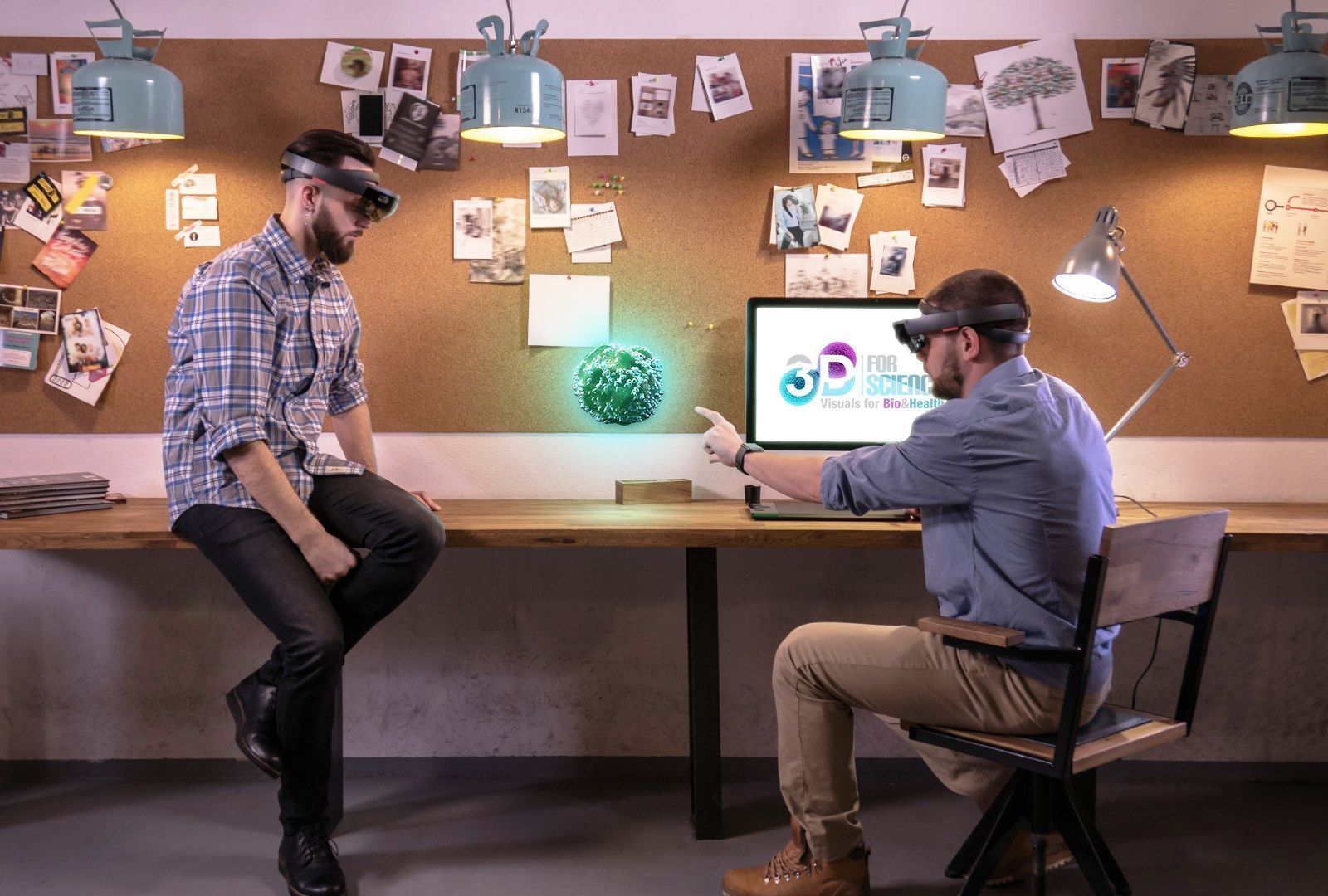 The Significance of HoloLens in Medical Education

From the early stages of the Microsoft HoloLens project, possible applications within the medical field were considered. When Microsoft launched HoloLens, one of the demonstrations of the system was an anatomy medical application, where users could view a 3D representation of a human body and navigate through layers of skin, muscle, and organs. In the HoloLens medical applications, users can walk around the model and see all the different structures in 3D from all possible points of view. Thus, it is possible to realistically experience the simulation of a diseased body, a stressed heart or a damaged lung. By using HoloLens in medicine any bodily function or dysfunction can be recreated, according to the educational need, in detail in front of the viewer.

In this sense, the Microsoft HoloLens medical education most obvious application for would be to use this system to perform anatomy procedures without the need to resort to animal models or real bodies. HoloLens anatomy app could also be used to view a patient’s diagnostic images projected onto his or her body in real-time. Not only at the individual level, but entire groups of specialists could also share the experience looking for the best diagnosis.

Recently, the U.S. Food and Drug Administration (FDA) has been approving augmented reality systems applied to the medical field such as applying their use in preoperative surgical planning. This type of initiatives allows projecting interactive images that are superimposed on the patient’s body using Microsoft’s HoloLens devices that allow simultaneous visualization of patient images in 3D in the AR and on the real patient and his environment in real time. The use of Microsoft HoloLens anatomy app in medicine techniques can decrease surgical time and improve surgical planning and understanding of anatomical relationships.

Similar developments to Microsoft Holo Lens in the medical field

Following this same basic principle of HoloLens anatomy app, large companies related to the medical sector have launched different developments that explore the possibilities of this technology. Philips has developed Azurion according to the same concept. Once as much clinical information as possible has been gathered, it will be used to facilitate the emergence of new augmented reality solutions in the future. Since its launch in early 2017, more than 500,000 patients have been treated worldwide using this platform which in the near future will expand to augmented reality applications in spine, cranial and trauma injuries.

As part of the constant process of digital transformation, companies in the sector are beginning to integrate this type of technology. In this example, the giant Merk incorporates HoloLense as part of its quality control system. This application frees technicians from the need to consult different procedural guides to fulfil with all the compliance requirements demanded by the client. This type of development can be extended to other facets of the production chain, improving equipment efficiency and quality standards.

Besides, the limits of this technology are still far from being seen. The next step is to place these resources in the hands of the end-user, either to help them understand the mechanism of action of a drug, the way a device is used or to innovatively transmit the company’s latest research.